Dacor stud farm was founded by the Bekbossynovs 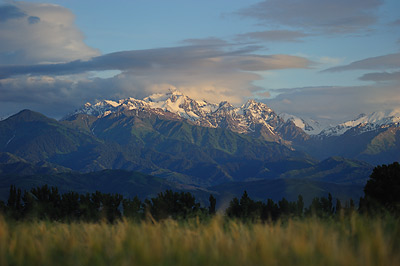 in 1996
in the picturesque foothills of the Trans-Ili Alatau near Almaty in
Kazakhstan.

This is one of the biggest studs in Central Asia. Its main specialization is breeding and preservation of purebred Akhal-Teke horses. Breeding stock of Dacor stud has the best representatives of Akhal-Teke breed of different lines, winners and champions of shows, both acquired from the Akhal-Teke's leading farms and born and raised at the stud.

The livestock at the stud amounts to over 70 horses, including 12 stallions of Kir Sakar, Skak, Gelishikli, Melekush, Posman, Sere, Kaplan, Arab, State Farm-2 lines and more than 30 mares of different lines.

Initial base stock consisted of horses from Stavropol and Lugovskoye studs. The very first Akhal-Teke horse and founder of the factory was buckskin mare Mziuri (Mekan-Horsta), born in 1997, of the Karlavach line. But the most important purchase occurred in 2001 when they bought from the Stavropol stud two-time World Champion dark buckskin Salyr, born in 1997 (Gaygysyz-Sania) of Posman line, bay mare Gozel, born in 1997 (Orlan-Garpina) of Gelishikli line, and bay mare Beata, born in 1997 (Polot-2-Basilic) of the State Farm-2 line.

In spring 2002, two mares - gorgeous daughters of early fallen Champion of Russia, black Ashug (Gylkuyruk-Azalia) of Kaplan line - Dilyara-01 from Jakarta and Aladja-01 from Akustika, were bought at Veles stud and delivered to Dacor. Black mare Cordelia-00 from Dialog and Kepderi came in the same horse trailer from distant Kalmykia.

In the winter of 2009, two more horses of the original Turkmen breed were imported from Turkmenistan: palomino stallion Elgush-95 (Erezgala-Gulistan), mare Akaltyn-97 (Karal-Adzhaip) of Karlavach line with buckskin mare Aelita-09 from Elgusha, and gorgeous mare Azhar-05 (Akhal-2-Akaltyn) of Gundogar line.

In 2011, the breeding stock of Dacor stud farm was enlarged by magnificent, well established in the sport stallions: the representative of the rare Skak line – black Montmartre-95 (Marquis-Migba) and black Radzh-99 (Alaman-Rampa) of State Farm-2 line. They also bought a purebred mare Polyana-96 (Orlan-Pervana) of Gelishikli line.

Every year, at least 20 foals with very interesting and unusual backgrounds are born at the stud. They combine the best Turkmen, Kazakh and Russian blood, and, with no doubt, they will always be winners at shows, in breed rings, and in various equestrian sports. Some of them are always offered for sale.

We are always happy to see true connoisseurs of this great horse breed.